At Open Whisper Systems, we’ve been working on improving our encrypted asynchronous chat protocol for TextSecure. The TextSecure protocol was originally a derivative of OTR, with minor changes to accommodate it for transports with constraints like SMS or Push. Some of the recent changes we’ve made include simplifying and improving OTR’s deniability, as well as creating a key exchange mechanism for asynchronous transports. Our most recent change incorporates what we believe to be substantial improvements to OTR’s forward secrecy “ratchet.”

As we’ve discussed previously, “forward secrecy” is one of the critical security properties OTR is designed to provide. In contrast to the PGP protocol model, where messages to a recipient are encrypted with the same public key over and over again, OTR uses ephemeral key exchanges for each session. This is a critical feature of any modern secure protocol, because otherwise a network adversary who records (potentially years of) ciphertext traffic can later decrypt all of it if they manage to later compromise the one key that was used. By contrast, with ephemeral key exchanges, there is no key to compromise in the future (since the keys are only ephemerally in memory for a short time), so any recorded ciphertext should remain private.

Simply doing an ephemeral key exchange at the beginning of a session is enough to provide this property, but OTR takes things a step further by continuously ratcheting the key material forward during the course of a session. The OTR ratchet is what we call a “three step ratchet.” 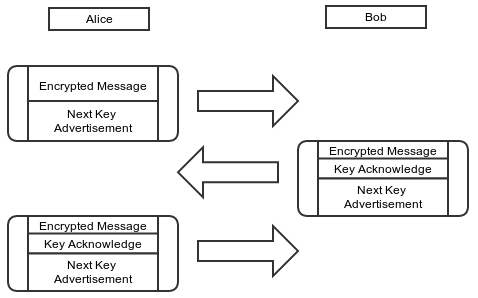 Note that, until Bob has acknowledged Alice’s next key, she can’t use it. If Alice needs to send multiple messages to Bob before he replies, Alice will need to keep using her current key and advertising the same next key.

Given that OTR was originally positioned for instant messaging apps, it’s not clear why individual message-level forward secrecy is necessary. Instant messaging sessions tend to be ephemeral, and the messages themselves tend to be in memory for the duration of the session, so it’s not entirely obvious what immediate value a ratcheting forward secrecy protocol provides in that context. Simply doing an ephemeral Diffie-Hellman key exchange at the beginning of every session would probably be enough.

As an asynchronous messaging app, however, TextSecure benefits greatly from such a ratcheting forward secrecy mechanism. Asynchronous chat sessions tend to be extremely long-lived (perhaps even years long), in contrast to IM sessions which are constantly being setup and torn down. In the context of long-lived sessions, however, the OTR ratcheting protocol leaves something to be desired. Given the nature of a “three step” ratchet, if a sender transmits something to a receiver, and the receiver doesn’t respond for a few days, the sender has to keep the key material used to encrypt that message around for days.

There are other simple problems as well. OTR was designed for transports which guarantee in-order delivery, which most asynchronous messaging transports don’t provide. There is a counter which prevents replay attacks, but it’s complex to adapt to an unreliable transport, and there is also a possibility that old messages can arrive after key material has been rolled forward.

Silent Circle uses a synchronous protocol of their own devising (called SCIMP) that employs a different style of ratchet. 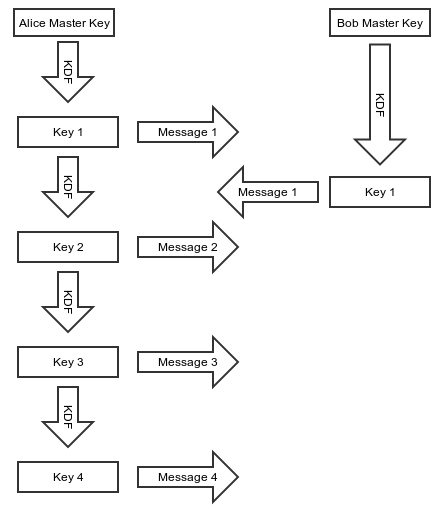 It’s clear that an asynchronous messaging app like TextSecure could benefit from an immediate ratchet. Even with long running sessions, there would never be any outstanding key material available for compromise. However, a protocol like SCIMP has some drawbacks as well:

The Window Of Compromise 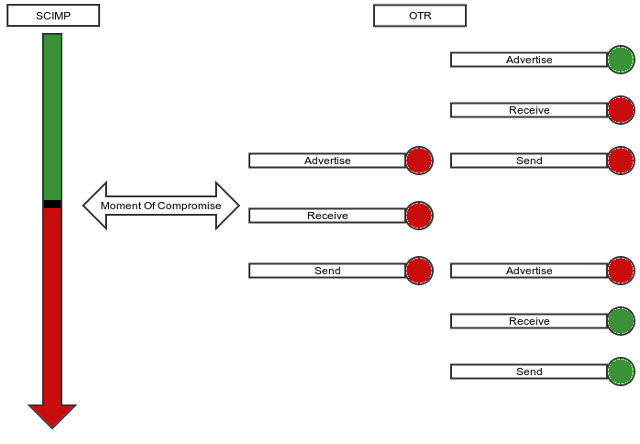 We wanted a ratchet that combines the best of both worlds: the optimal forward secrecy that a hash iteration ratchet like SCIMP provides, as well as the nice future secrecy properties that a DH ratchet like OTR provides, with as little of the negatives of both as possible. The inimitable Trevor Perrin did most of the heavy lifting for the primary innovations in combining the two.

First, remember that the OTR message format looks roughly like this:

All these key IDs are necessary because OTR is based on a mechanism of “advertising” keys and receiving confirmations for those keys in subsequent messages. By advertising a key under a MAC from the previous key, the integrity of advertised keys can be traced all the way back to the original shared key, ensuring that no MITM attack is possible on any of the subsequently advertised keys. However, that is the source of our “three step” DH ratchet problem, and also makes for a fair amount of book keeping.

We wanted to incorporate a DH ratchet into our ratcheting protocol because of the “future” secrecy it provides. However, it would be nice if we could eliminate the “advertise” step in the OTR ratchet and bring it down to a “two step” ratchet. In order to achieve a “two step” ratchet, we derive a RootKey in our initial handshake KDF, and both mix it into and re-derive it from every subsequent DH KDF. This makes it possible to chain the key material together so that Alice can create and use a new DH ephemeral key immediately without first advertising it and waiting for acknowledgment. Because the RootKey is mixed into the KDF, trust in new ephemerals can still be chained back to the initial handshake.

This is a best possible case DH ratchet, and it also greatly simplifies the message format, which is now simply:

It also eliminates all the key ID book keeping.

From Alice’s perspective, the final picture looks like this:

The final message format is simply:

The result is a ratcheting protocol that combines the best of a DH ratchet’s “future secrecy” properties with the optimal “forward secrecy” properties from a hash ratchet. It also simplifies the wire format and eliminates all the key ID book keeping. Nice properties like cryptographically enforced message ordering and replay protection all come for free, without any complex record keeping required. The code is simpler, and the protocol security is more robust.

This is obviously a simplified protocol description, but the full specification can be found here if you’d like to look at it critically or in more detail.